A system’s properties are the characteristics (including topology/interconnections of parts/elements, mass properties, organization/configuration, stability, controls, etc.) and behavior of the system.

involves the design and manufacture of instrumentation and ways to control dynamic processes automatically. Such engineers draw on a variety of disciplines, including elements of electrical, mechanical, and chemical, and focus on the technologies needed for feedback and feedforward control of dynamic systems. These engineers ensure safe and efficient system performance.

A wire or combination of wires not insulated from one another, suitable for carrying electric current.

Arrangement of contacts in a multiple-contact connector.

A device providing electrical connection/disconnections. It consists of a mating plug and receptacle. Various types of
connectors include DIP, card edge, two-piece, hermaphroditic, and wire wrapping configurations. Multiple contact connectors with others in one mechanical assembly

Is the primary field of engineering concerned with the development of aircraft and spacecraft. It has two major and overlapping branches: Aeronautical engineering and Astronautical Engineering. Avionics engineering is similar, but deals with the electronics side of aerospace engineering.

Is the technology by which a process or procedure is performed with minimum human assistance. Automation or automatic control is the use of various control systems for operating equipment such as machinery, processes in factories, boilers and heat treating ovens, switching on telephone networks, steering and stabilization of ships, aircraft and other applications and vehicles with minimal or reduced human intervention. Some processes have been completely automated.

Control engineering or control systems engineering is an engineering discipline that applies automatic control theory to design systems with desired behaviors in control environments. The discipline of controls overlaps and is usually taught along with electrical engineering at many institutions around the world.

Manages, commands, directs, or regulates the behavior of other devices or systems using control loops. It can range from a single home heating controller using a thermostat controlling a domestic boiler to large industrial control systems which are used for controlling processes or machines. The control systems are designed via control engineering process.

In materials science, deformation refers to any changes in the shape or size of an object due to

The density, or more precisely, the volumetric mass density, of a substance is its mass per unit volume. The symbol most often used for density is ρ (the lower case Greek letter rho), although the Latin letter D can also be used. Mathematically, density is defined as mass divided by volume

Is an electrical machine that converts electrical energy into mechanical energy. Most electric motors operate through the interaction between the motor’s magnetic field and winding currents to generate force in the form of rotation.

An engine or motor is a machine designed to convert one form of energy into mechanical energy. Heat engines convert heat into work via various thermodynamic processes.

Is the use of scientific principles to design and build machines, structures, and other items, including bridges, tunnels, roads, vehicles, and buildings.[196] The discipline of engineering encompasses a broad range of more specialized fields of engineering, each with a more specific emphasis on particular areas of applied mathematics, applied science, and types of application.

Is an engineering profession that is concerned with the optimization of complex processes, systems, or organizations by developing, improving and implementing integrated systems of people, money, knowledge, information and equipment.

A machine (or mechanical device) is a mechanical structure that uses power to apply forces and control movement to perform an intended action. Machines can be driven by animals and people, by natural forces such as wind and water, and by chemical, thermal, or electrical power, and include a system of mechanisms that shape the actuator input to achieve a specific application of output forces and movement

Is a branch of professional engineering that shares many common concepts and ideas with other fields of engineering such as mechanical, chemical, electrical, and industrial engineering. Manufacturing engineering requires the ability to plan the practices of manufacturing;

Molding (American English) or moulding (British and Commonwealth English; see spelling differences) is the process of manufacturing by shaping liquid or pliable raw material using a rigid frame called a mold or matrix. This itself may have been made using a pattern or model of the final object.

(also computer numerical control, and commonly called CNC)[1] is the automated control of machining tools (such as drills, lathes, mills, grinders, routers and 3D printers) by means of a computer. A CNC machine processes a piece of material (metal, plastic, wood, ceramic, or composite) to meet specifications by following coded programmed instructions and without a manual operator directly controlling the machining operation.

The control of mechanical force and movement, generated by the application of compressed gas.

Is an interdisciplinary field that integrates computer science and engineering. Robotics involves design, construction, operation, and use of robots. The goal of robotics is to design machines that can help and assist humans.

A motor that moves to and maintains a set position under command, rather than continuously moving.

Is a device or natural object that regulates, directs or controls the flow of a fluid (gases, liquids, fluidized solids, or slurries) by opening, closing, or partially obstructing various passageways. Valves are technically fittings, but are usually discussed as a separate category. In an open valve, fluid flows in a direction from higher pressure to lower pressure.

In algebraic geometry, the axis on a graph that is usually drawn left to right and usually shows the range of values of an independent variable.

In algebraic geometry, the axis on a graph that is usually drawn from bottom to top and usually shows the range of values of variable dependent on one other variable, or the second of two independent variables.

In algebraic geometry, the axis on a graph of at least three dimensions that is usually drawn vertically and usually shows the range of values of a variable dependent on two other variables or the third independent variable. 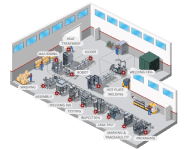 See How Automation Works With Our Interactive Assembly Line